TEK's Student Survey is conducted every autumn to produce data about the employment and career expectations of students and their attitudes towards working life. The target group consists of all the student members of TEK, and the survey usually has a different theme each year. The 2021 Student Survey included questions on the harassment and mistreatment experienced by students. In addition, one of the background variables was belonging to a minority group (see the section “How was the survey conducted?” at the end of the article). In this article, we look at the experiences of harassment and how they relate to belonging to various minority groups.

Minority students have experienced much more harassment and mistreatment than the respondents who do not belong to a minority group. 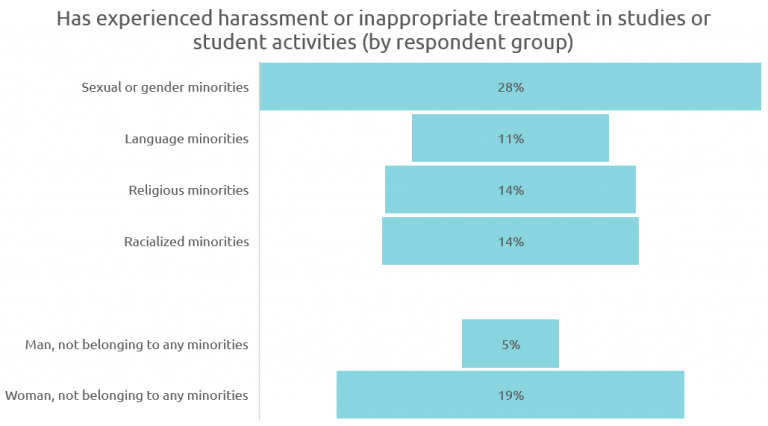 Figure 1: Experienced harassment or mistreatment in studies or student activities.

The comments written by minority respondents mentioned bullying, exclusion and inappropriate comments. This is how some of them described their experiences:

Many of the comments from minority respondents also described situations where their reference group had been made fun of through humour or other behaviour. They felt distressed in these situations, even if the offensive behaviour was not aimed directly at them.

This survey looked at experiences of harassment and mistreatment particularly in the context of studying and working. However, it is worth keeping in mind that harassment can also happen elsewhere, and this also affects the student experience of international students, for example. As one respondent from a racialized minority wrote:

Students experience harassment and mistreatment approximately as often while working in their own field as they do in their studies. Nonetheless, there are some differences between the groups. Please note that in the Student Survey, working in one's own field means that a student works in their field of study during the academic year, in the summer, or is performing so-called “haalariharjoittelu” internships.

The mistreatment of respondents belonging to racialized minorities in working life was much more common than in studies. Of the respondents in this group, one in four (25%) reported mistreatment or harassment at work, compared to the corresponding figure of 14 percent during their studies.

The forms of mistreatment at work included undervaluing the person’s skills, inappropriate behaviour and sexual harassment.

“The worst racism I have come across was when looking for a job. Based on my experiences, I believe that brown skin is a major obstacle to finding employment in Finland.”
- Student from a racialized minority, TEK’s Student Survey 2021

It is important to acknowledge that although student life is considered to be widely equal, this phase has its own problems, and the issues do not suddenly start after students transition to work. Promoting non-discrimination not only requires taking minorities into account, but also improving gender equality.

What changes when racialized minorities transition from study to work?

What is striking in the results is the high frequency of workplace harassment and mistreatment experienced by students belonging to a racialized minority. Students from a racialized minority reported harassment and mistreatment in their studies as well, but the percentage of those who reported such treatment while working in their own field was almost twice the percentage with similar experiences during their studies (25% while working in their field, 14% during studies).

The data collected in the Student Survey does not provide a direct answer as to why mistreatment is so common in working life. It is worth asking if there are protective factors in the academic community, such as the more positive attitudes of younger students towards people from different backgrounds. On the other hand, the anti-discrimination efforts of universities may also contribute to a better situation while studying. There may also be fewer situations in the school environment where prejudices against students from racialized minorities are revealed.

It is worth noting that the question about harassment at work was answered only by those who had managed to find a job in their own field while studying. Experiences of mistreatment related to discrimination in recruitment remain at least partly hidden. These include cases where a survey respondent has not managed to get a job in their field because of their foreign name. Name discrimination in recruitment has been studied in Finland by Akhlaq Ahmad, among others.

The harassment and mistreatment experienced by gender and sexual minorities is alarmingly common both during studies and while working in one’s field. Based on the written comments, sexual undertones and sexism are rampant in student culture and particularly the “teekkari” culture of tech students. Such a culture that reinforces hegemonic masculinity has been identified as a factor that inhibits inclusion in several studies concerning discrimination in the field of technology. (Cf. e.g. Wynn & Correl or Faulkner)

One possible explanation for the frequency of harassment experiences during studies is that students belonging to sexual or gender minorities do not openly express their identity in their workplaces as often. An extensive report conducted by the European Union Agency for Fundamental Rights (FRA) reveals that many Finnish LGBTIQ+ people are at most only partially open about their identity.

“If the environment does not provide a safe setting for expressing identity openly, members of sexual and gender minorities experience considerable stress.”
- Sanna Putila and Susanna Bairoh

We should therefore take care not to draw the conclusion from this data that safely belonging to a sexual or gender minority is easier at work than during your studies. It is also worth noting that even if hiding your identity is possible and would partially protect you from harassment and mistreatment in your workplace, the situation is far from ideal. If the environment does not provide a safe setting for expressing identity openly, members of sexual and gender minorities experience considerable stress.

Lastly – what are the consequences of harassment and mistreatment?

The results concerning harassment and mistreatment also correlate with the perceived ability to cope. The same groups that reported more mistreatment than the average respondent also reported more problems with coping in TEK’s Student Survey. Moreover, minority students expressed more pessimistic views when asked about their expectations for future work.

The results of the Student Survey show that minority status clearly affects well-being and the study and work experience, and this link should be considered when planning various support measures. Harassment and mistreatment are not the only factors affecting well-being, but it is obvious that experiences of mistreatment and harassment certainly do not improve well-being. In addition, it is important to realise that a significant portion of technology students belong to minority groups. If we also add women who experience mistreatment into this group, it becomes even larger. This issue does not therefore concern just a few individuals, but tens of thousands of students.

How was the survey conducted?

The data also included several female respondents who felt they belonged to a minority in their field, but also male respondents who argued that the position of a white heterosexual male is comparable with a minority status. In addition, there were some respondents who identified as belonging to a minority group based on being “a tech student”, “having a sense of humour”, “eating meat”, “intelligence” or a similar criterion. These answers were excluded from the analysis, which focuses only on attributes that have been listed as grounds for discrimination under the Non-discrimination Act (cf. e.g. valtioneuvosto.fi).

Table 1. Belonging to a minority group.

* Gender minority refers to people whose gender or its expression differs somehow from the normative understanding of gender. This group includes transgender people, transvestites, non-binary and intersex people.

** Racialized minority refers to people who are associated with a particular group based on assumptions, stereotypes or prejudice due to their skin colour, religion, language or ethnic background, for example.