Nearly half of LGBTQI+ students fear discrimination in their career

The career prospects of technology students belonging to a sexual and/or gender minority are shadowed by a fear of discrimination. Of the LGBTQI+ students who answered TEK's Student Survey, 46 percent fear they will face discrimination in their career. The difference compared to non-minority respondents is significant, as only 12 percent of them fear discrimination: 7 percent of men and 22 percent of women.

“The notion of who is suitable to work in the field and whose abilities are credible is often narrow in the technology industry. Not fitting in the mould can cause stress. It takes energy to have to think about where and when it is safe to be open about your minority status. If you can be yourself in your professional community without fear of discrimination, you can focus this energy on the work itself,” says TEK’s Research Manager Susanna Bairoh.

According to TEK's study, 68 percent of LGBTQI+ students are concerned about their ability to cope at work. The corresponding figure for non-minority students is 42 percent.

According to Bairoh, the results of TEK’s Student Survey are in line with the findings of international studies. The difference is that in Finland, the discussion on the occupational wellbeing of sexual and gender minorities is still in its infancy.

“Workplaces should be safe spaces where each and every one of us can be ourselves as much as we want to. A better ‘professional self’, as it were.”

Nearly one in four has experienced harassment at work

Of the LGBTQI+ students, nearly one in four (23 percent) had experienced harassment or mistreatment while working in their own field. The share of, for example, non-minority women who said the same was 18 percent, and men, 4 percent.

“Some of the students who answered our survey had the experience that it was considered OK in the workplace to tell jokes about minorities. This kind of experience undermines the belief that working life treats everyone well and equally.”

Tech students felt that the most important elements of their career are having an interesting job, self-improvement, finding a balance between work and other life and a secure income. LGBTQI+ students are no different than non-minority students in this respect. But there are differences in whether the students also believe that these important elements are likely in their career or not. In terms of having an interesting job, the difference is small, but it grows when asked about the balance between work and leisure. LGBTQI+ students do not consider finding a balance as likely as other students.

How the survey was conducted

TEK’s Student Survey 2021 garnered responses from 3,260 student members of TEK in autumn 2021. The response rate was 18%. Of the respondents, 9 percent stated that they belong to a sexual and/or gender minority.

Visualization of the results of TEK’s Student Survey 2021 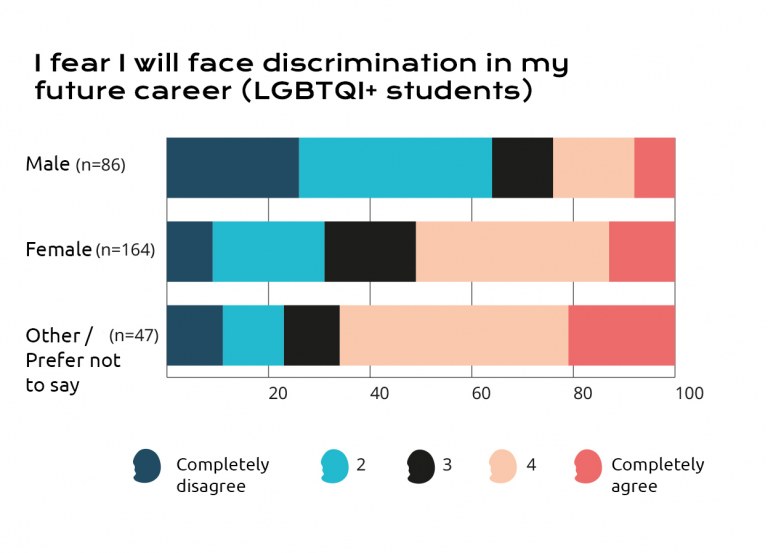 Read more about TEK's studies about diversity and inclusion