How a teekkari cap is made

TEK Magazine looked into the manufacturing process of the iconic Finnish tassel cap (teekkarilakki) and followed its journey from the hands of sewers to the hat store on Sofiankatu in Helsinki. 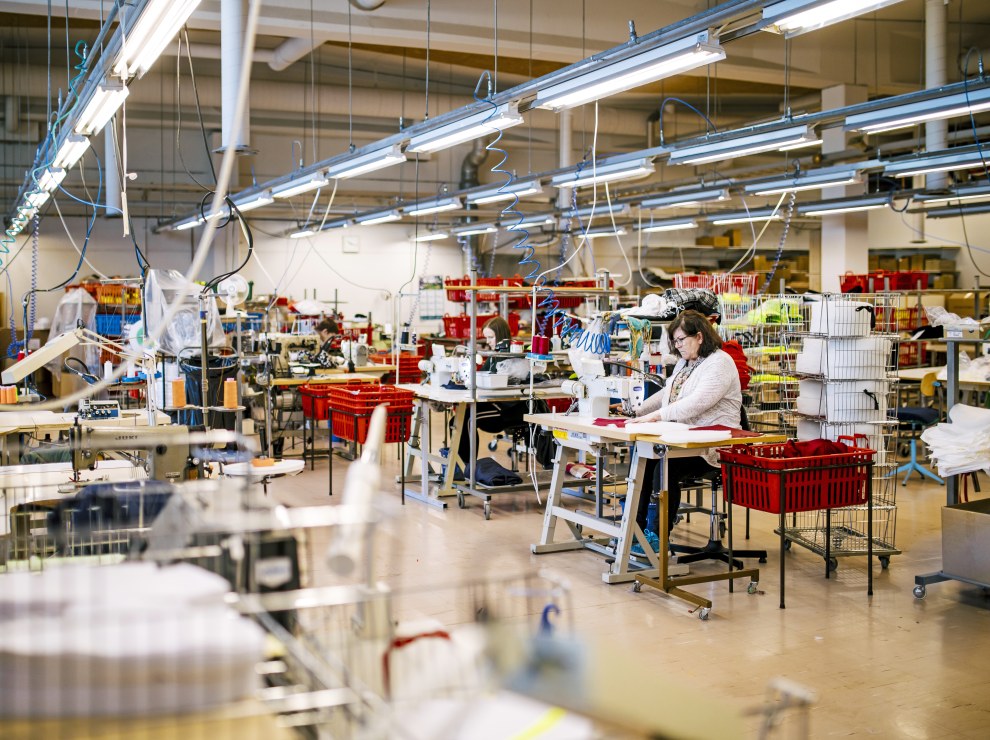 E.R. Wahlman Oy is the only company in Finland that manufactures and sells teekkari caps. The sewing work is subcontracted to Keskimäki Oy. The caps are made in Finland but the materials are ordered from suppliers abroad, mostly from Italy and Germany. The kinds of materials needed for the teekkari cap are not made in Finland.

The teekkari cap is a summer hat. One is allowed to wear the cap from May Day Eve or May Day until the end of September. Freshmen, for example, may put the cap on their head on the May Day of their first year of studies at the very earliest. A person can also request permission to wear the cap at a wedding or other such event. This permission is granted by a student union or a teekkari association or section, based on the city. There are various guidelines for wearing the cap, some of which are city-specific. For example, the insignia regulations of the Teekkari Union of Tampere state that you are only allowed to drink champagne from your teekkari cap, or if champagne is unavailable, then sparkling wine is also acceptable.

– But this kind of use is not covered by our warranty, says the CEO of E.R. Wahlman Oy Pia Tanskanen with a laugh. 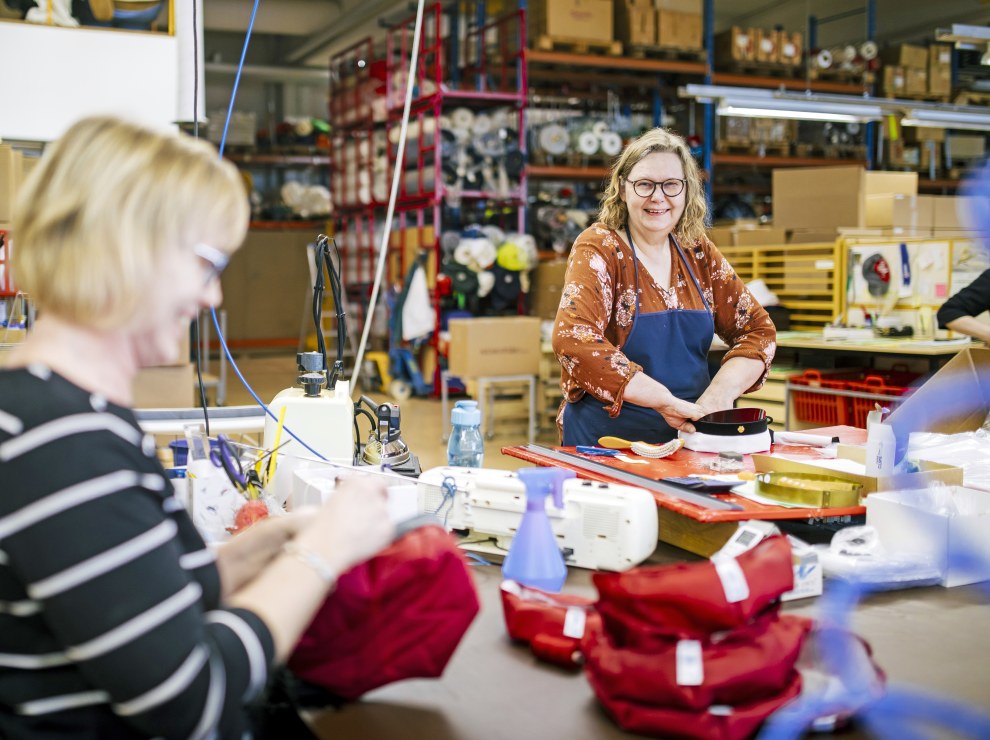 The Wahlman teekkari cap represents Finnish craftsmanship and it has been awarded the Finnish Key Flag Symbol by the Association for Finnish Work.

– It is great that the teekkaris appreciate and want to use Finnish work, Pia Tanskanen says.

The annual sales numbers vary by student numbers and how enthusiastic people are to buy caps, but usually the company sells well over a thousand caps a year. The prices of Wahlman caps vary slightly based on the model. When purchased from the store on Sofiankatu, the prices are approximately 140–146 euros. First year students, or freshmen, usually order their caps in groups, which reduces the price of an individual cap.

In the spring, Wahlman makes and sells teekkari caps, and in the autumn they have time to repair old caps brought in by customers. Wahlman can, for example, replace a worn-out tassel, put a detached tassel back on or make the cap smaller or larger.

– We only repair caps bought from us. Caps come in for repair in all kinds of conditions. I’d like to remind everyone that the teekkari cap is not a sauna hat or swimming cap! The tassel cannot cope with being submerged in water or the hot steam of the sauna, Pia Tanskanen says. 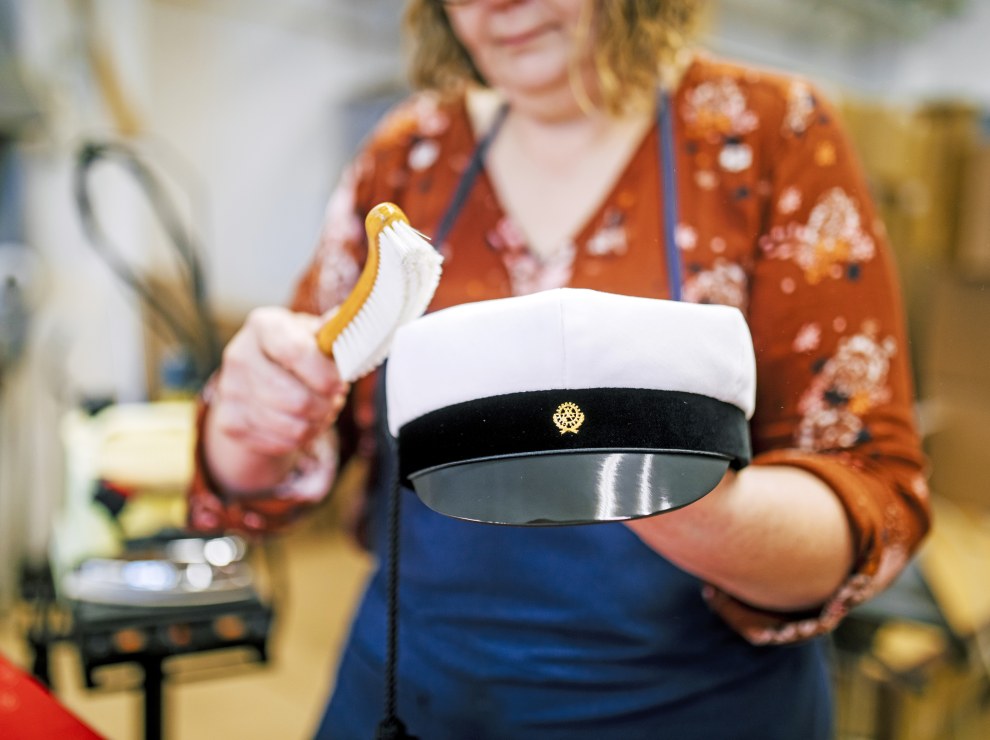 The top of the teekkari cap is made of white velveteen, the sweatband is made of leather and the black peak is artificial leather. The sweatband of the vegan version is made of fabric. The tassel is black and braided, but Pia Tanskanen does not wish to elaborate further. The tassel is a trade secret, and a foreign competitor has tried to spy on Wahlman to discover its “recipe”.

– We introduced the vegan version of the cap almost five years ago as per popular demand, Tanskanen says.

Nearly every teekkari in Finland orders their teekkari cap from Wahlman. Only the teekkaris in Vaasa order their caps from the Danish C.L. Seifert. In addition to teekkari caps, Wahlman also makes other graduation hats for secondary school graduates, double degree graduates, bachelors of business administration and doctors. In the Sofiankatu store, Wahlman also sells various felt hats, top hats, bowler hats and a wide variety of caps.

Wahlman employees verify the eligibility of each person looking to buy a teekkari cap. The eligibility criteria differ slightly between teekkaris from different cities: in some places the purchase permit must be acquired from the student union and in others a university registration certificate will do. People who have already graduated sometimes come in to buy a new teekkari cap to replace a lost one, in which case their eligibility is verified from the register or with a certificate of graduation.

– Before May Day we might get a few people trying to buy a teekkari cap without permission, but these attempts are thwarted as the eligibility is verified for everyone, says Pia Tanskanen. 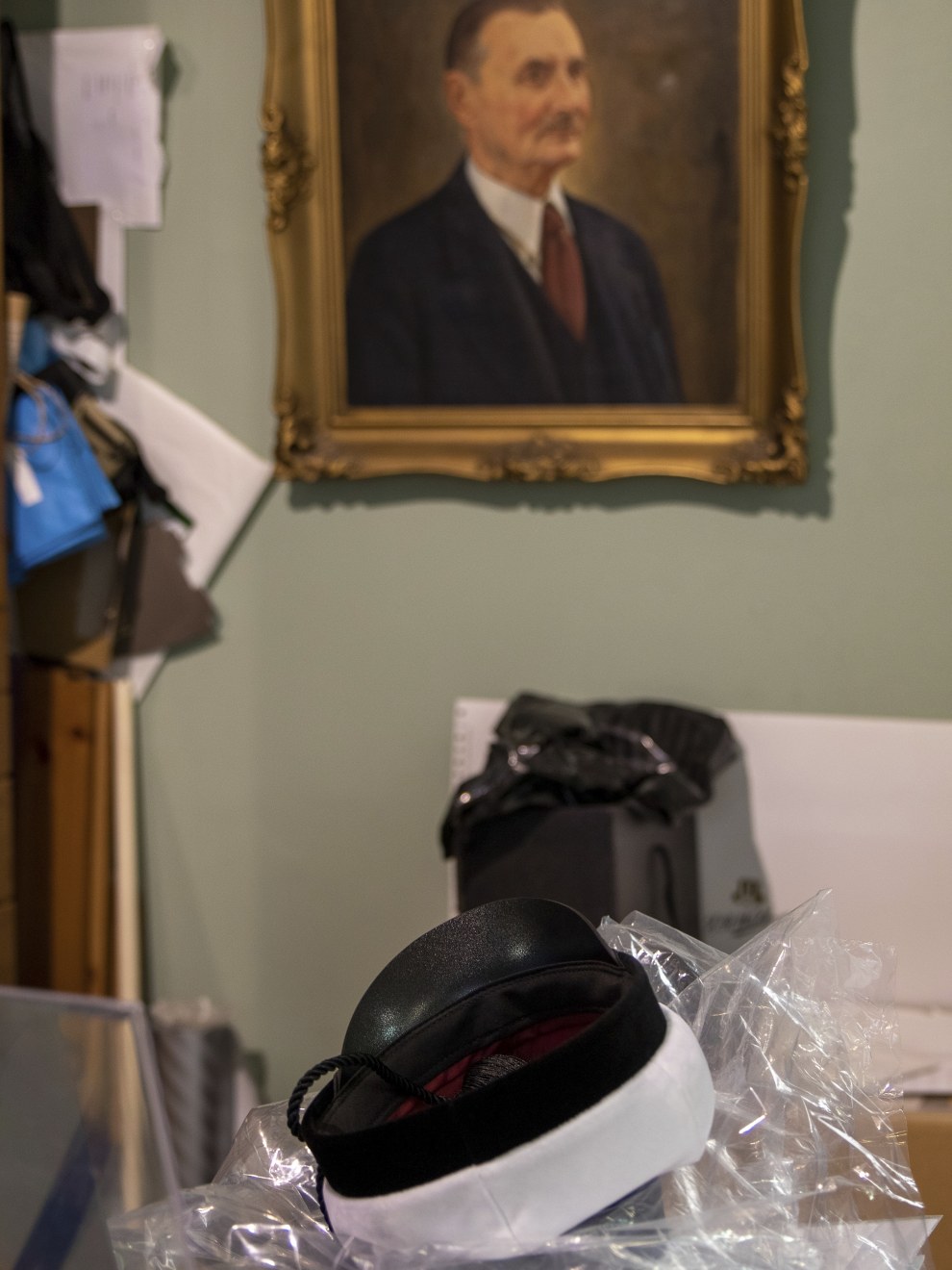 Elis Robert Wahlman, pictured in the painting, founded the Wahlman hat store in Vyborg in 1901. In the mid 1920s Wahlman opened a branch store on Heikinkatu in Helsinki (now known as Mannerheimintie). As a result of the Winter and Continuation Wars, Wahlman had to close the store in Vyborg and Helsinki became the company's home. From Heikinkatu the company moved to Pohjois-Esplanadi before finally settling in its current location between the Senate Square and the Market Square at the address Sofiankatu 5 in the year 2001. The company’s Vyborg roots are still visible in the old cash register decorating the current store and in some of the tools that the company still uses to make doctor's hats and caps.

It seems to be a matter of honour for the teekkari that the cap shows signs of use.
- Pia Tanskanen, CEO of E. R. Wahlman Oy 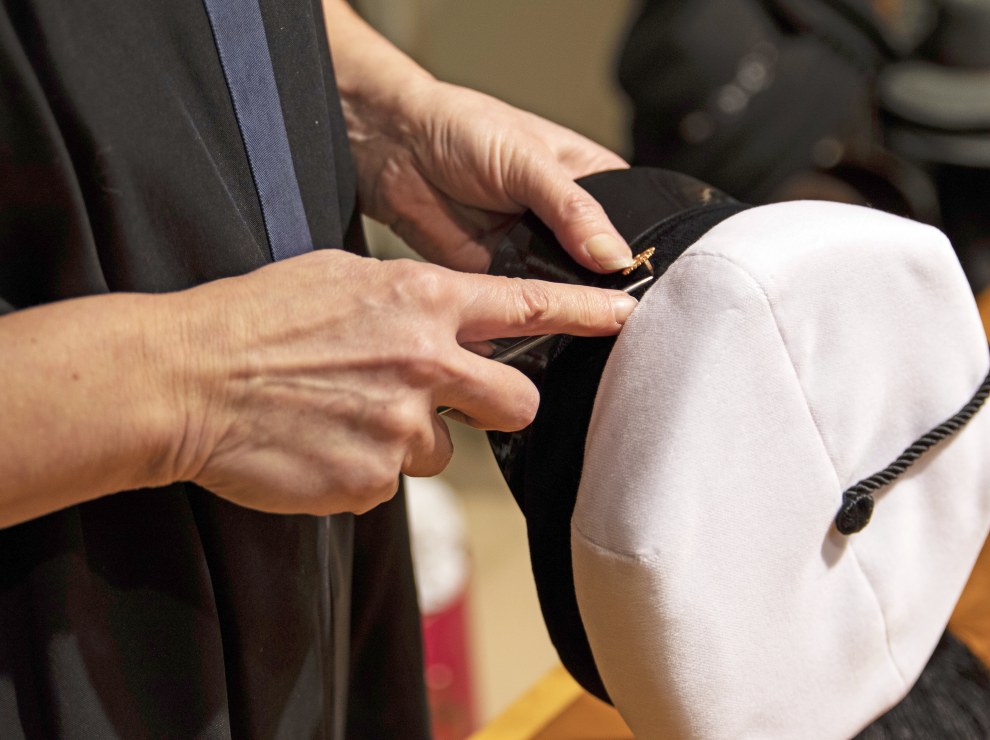 The attachment point of the tassel and the length of its string vary by city. In Espoo, Tampere and Lappeenranta, the tassel of the cap is attached to its centre, while in Turku it is on the side of the cap. The tassel of an Oulu cap is attached to the end of “the drip”. Their string is longer than everyone else's because in Oulu the teekkaris add a knot to the cap’s string for each May Day spent in Oulu. On their fifth May Day, a teekkari must make a slip knot on the string that they are allowed to open once they graduate.

The size of the cockade varies by city. For example, the cockade featured on the teekkari cap of Aalto University is the symbol of the Polytechnicians' Association from the 19th century, while in Oulu each teekkari guild has their own cockade. The chair of OTY, the Technical Students Association Oulu, also has their own cockade. The drip of the Oulu cap may also be adorned with a cap symbol or cockade.

Pia and Anne Tanskanen only fix the cockades onto the caps of Aalto University and the University of Tampere once they reach the store.  As they arrive from the sewing shop, the caps look the same but they are differentiated by their cockades. In the photo Pia is in the process of attaching the cockade to a polyteekkari cap from Otaniemi. 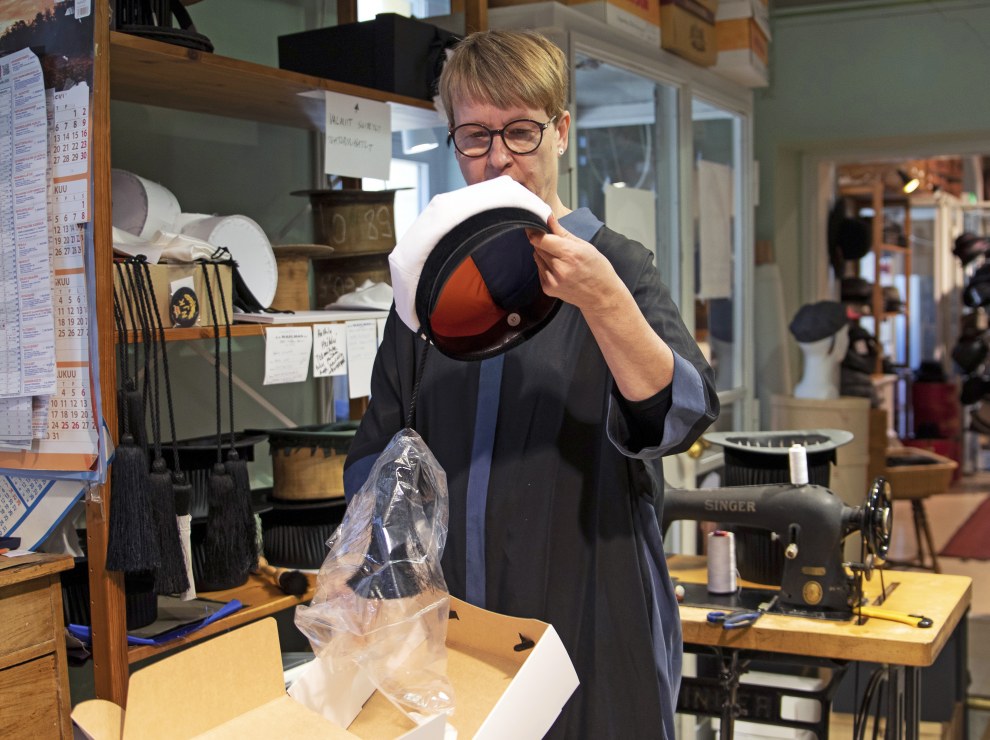 Pia Tanskanen runs the Wahlman hat store together with her sister Anne.

In addition to the Tanskanen sisters, the store has two regular employees. They work on doctor's hats. Wahlman also has three part-time employees working in sales and sewing during peak periods. Furthermore, the manufacture of teekkari caps employees five people in the sewing shop.

Pia learned the noble art of teekkari cap making as a journeyman: she began working at the Wahlman store as a weekend helper when she was 14. Now she has over 40 years of experience in the hat business. Anne also worked weekends at Wahlman when she was 14 years old while going to school, and she returned to Wahlman six years ago.

Pia did not want to put on a teekkari cap for this photo because “the cap may only be worn by a teekkari”. 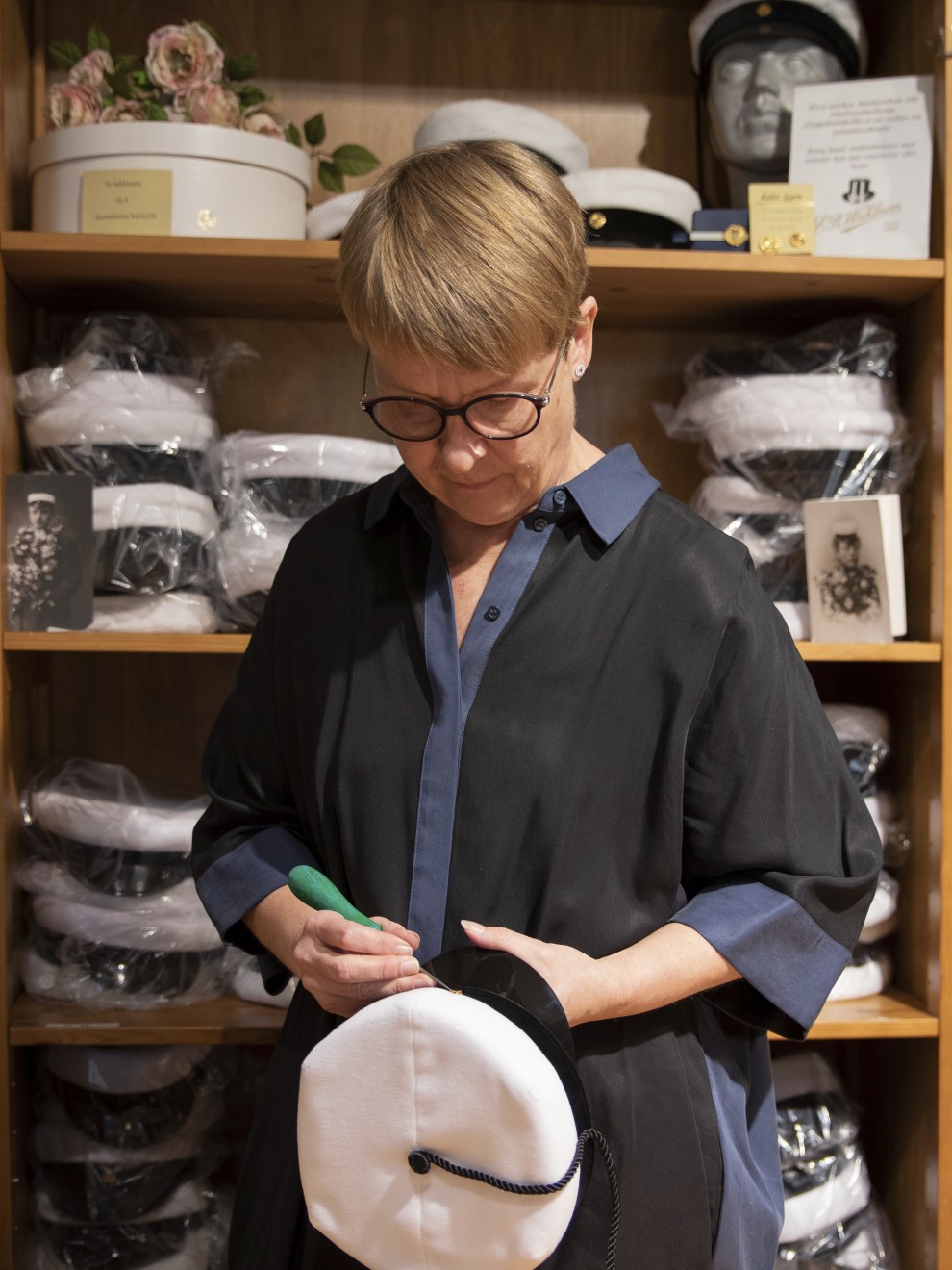 When you are buying a teekkari cap, you should measure your head horizontally from above your eyebrows. The tassel has enough weight to it that if the cap is too large, the tassel will pull it askew on the teekkari's head.

You should store the teekkari cap so that it is protected from light if you want it to remain white. The tassel can be wrapped up in paper, and the plastic ring that comes with the cap can be placed inside it. This helps the cap retain its shape and the tassel will not get tangled.

– This is our idea of how the cap should be stored if you want it to remain in good shape. It seems to be a matter of honour for the teekkari that the cap shows signs of use, says Pia Tanskanen (pictured).