In 6G network, even electricity is transmitted wirelessly

The winner of the dissertation of the year outlined how machines communicate most efficiently in the mobile network of the future. Wireless power transfer, on the other hand, may relieve IoT appliances of electric wires and batteries.

Researcher Onel Alcaraz López shows us to his room in the CWC (Centre for Wireless Communications) research unit in the University of Oulu. The title Assistant Professor has only recently appeared by the door.

The nomination is quite an achievement for the little over 30-year-old researcher who only recently defended his doctoral thesis.

– It was flattering, says López smiling.

Matti said that Oulu is the best place in the world to carry out research.

López came to Oulu for the first time in March 2017. Academy professor Matti Latva-aho had heard from his professor colleague in the University of Paraná, Brazil, about a talented Cuban master’s student considering postgraduate studies.

– Matti said that Oulu is the best place in the world to carry out research.

After four years in Oulu, López completely agrees. Oulu’s 6G Flagship is the largest 6G research programme in the world. It employs approximately 400 researchers who represent over 50 nationalities.

Only three years later, López’s postgraduate studies are completed and he has about thirty scientific publications in his list of publications. The publications present new solutions for the data transfer between machines in the 6G networks of the future.

The thesis of the year, awarded by Tekniikan akateemiset TEK and Tekniska Föreningen i Finland TFiF, has academic merits for more than one doctoral theses. This derives from the statement of the German professor who acted as López’s opponent in 2020. He does not spare his superlatives in the description of the thesis’ scientific virtues.

Network for the needs of machines

Summing up the 12 research papers of the thesis is a challenging task.

López helps out by using a practical example, the automation systems of the factories in the future. In them, the buzzword IoT (Internet of Things) will be an everyday reality. Instead of 6G networks’ human users, López focuses in the communication needs of machines in his work.

– The communication between machines is an integral part of the entire design of 6G technology.

When the sensors and actuators in a factory are built with wireless technology, the data transfer rate will no longer be the most important thing, as it has been for the network generations so far.

– In the sensors, more important aspects are reliability and short delays. The data transfer cannot fail, and if it does, the connection must recover fast, clarifies López.

López’s research papers tackled these sorts of use cases. Within a radius of ten metres, there might even be a network of up to thousands of sensors, and the network has to be able to communicate among itself efficiently and without delays.

– I developed algorithms for sharing data transfer resources efficiently in these kinds of environments. The requirements are completely different from our current mobile networks. 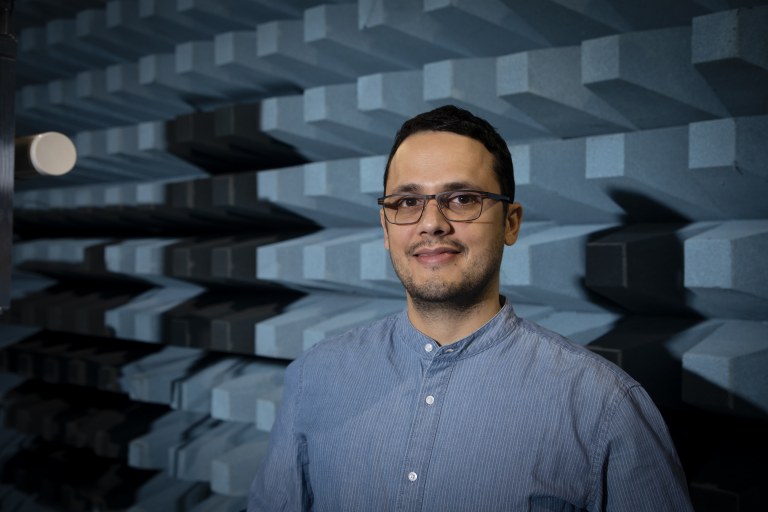 Settling down in Finland was easy. The family’s daughter was born in Finland.

A couple of the thesis’ research papers aimed even further.

Nikola Tesla envisioned technology for the wireless transfer of electricity already in the end of the 19th century. Today, the wireless charging of mobile phones is already a fact of life, but López intends to bring the wireless power transfer also as a part of the data transfer technology of the future.

This would free up sensors and actuators within a distance of a couple of metres from the chains of cabling.

– Working distance of ten metres is a good objective for us, says López.

As López was still beginning his thesis work, the technology seemed futuristic, but now the wireless power transfer is studied by several other researchers.

Already today keeping the mobile devices of the household charged is a lot of work. As the number of IoT terminal devices around us increases, the problem keeps growing.

– Imagine a factory environment, for example, packed with wireless sensors and detectors. The batteries of IoT appliances might become an enormous waste problem in the future.

Also a couple of start-up companies are developing a similar technology, even though there are no standards yet.

López’s dissertation’s research papers are at the forefront of the technologic development.

– So far, we have only thought about charging a couple of devices at a time.

López started with the assumption that there will be hundreds or thousands of appliances in the network. The strategy for wireless power transfer suggested by the thesis is also simpler than the former suggestions.

– But this thesis work was only the first step, says the researcher in his modest manner.

Plenty of research needs to be conducted but López intends to demonstrate it soon in practise. If big companies will become enthusiastic, the technology has a good chance of becoming a part of the 6G standards of the future.

The 6G White Papers outlining the network of the future, created in Oulu 6G Flagship programme, has been downloaded hundreds of thousands of times. Onel López is one of the writers.

López’s instructor suggested his thesis for the award.

– We have talented researchers but I have never come across a research talent of his calibre, says Matti Latva-aho.

Although López’s thesis and its publications were of an exceptionally high standard, Latva-aho had to work hard in order to organize a professorship for the promising researcher immediately after the doctor’s thesis was completed.

– I knew that his research aroused much interest around Europe. It was such great news for us that he decided to stay in Oulu with his family.

The selectors of the dissertation award were also convinced of the academic merits when they selected López among 23 top dissertations.

– This is already the third TEK dissertation award in our research unit, praises Latva-aho.

The first award was received by Latva-aho himself in 1999, in 2008 it was given to one of his doctoral students and now to López.

A Cuban professor in the University of Oulu

The move from Brazil in March 2017 to the other side of the world, to Oulu, was a real leap in the dark for Onel López. The visions of the darkness and the coldness made him doubt whether he’ll survive it.

– But I knew that I want to continue my research and that Oulu was a really good university when it comes to the field of wireless data communications.

Against all expectations, the concerns proved to be unnecessary.

– I even liked the weather and the people here.

At times, the Cuban researcher who moved from Brazil to Finland sounds like a modest Finnish engineer who is a little embarrassed when the conversation turns to his achievements. At the moment, the interview is conducted in English, but he is planning some Finnish language studies.

López praises his new home town where his family has settled down. On his desk is a photo of his two-year-old daughter Elli.

– The research is not everything, though. Family is the most important thing, says López.

I was always interested in mathematics, physics and chemistry.

1989. Onel Alcaraz López is born in the city of Sancti-Spíritus in Cuba.

– I was always interested in mathematics, physics and chemistry.

2013. Bachelor’s Degree in electrical engineering in the university Las Villas is completed, López is employed by the Cuban telecommunications company ETECSA.

2015. López has the opportunity to begin master’s studies in the field of data communications technology in the Federal University of Paraná in Brazil.

2017. López moves with his wife to Oulu and begins his postgraduate studies.

2020. López’s dissertation “Resource allocation for machine-type communication: from massive connectivity to ultra-reliable low-latency” is approved in the University of Oulu with grade “passed with great credit”.

2021. López accepts an assistant professorship at the CWC (Centre for Wireless Communications) research unit in the University of Oulu, TEK awards him for the best dissertation of the year.

What do you want to achieve as a doctor of technology?

“I want to gather my own research group and participate in the design of the 6G network of the future. In the future, it would be great to be nominated as an IEEE (Institute of Electrical and Electronics Engineers) Fellow.

“When I was younger, I played the strategic game Age of Empires, now I design 6G algorithms.”

“Spending time with my family.”

TEK, TFiF and MAL give out awards for the best theses in 2021